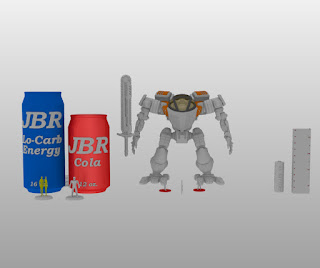 Got a 3D printer?
Got a buddy with a 3D printer?
Know how to upload a file to a service bureau, and have them mail the print to you?

I've got something planned.

As part of my upcoming release (Junctionworld Book One: Defiance), I'll be releasing .stl format files of mechs and mech parts in various scales.

This can all be done through the magic of the Scale command.

Just for reference, the mech pictured above (an early form of Judah, a custom gladiator mech) is about the same size as a WH40K Imperial Knight model, so the weapons would be similar.

Have an idea?  email me at johnbearross@gmail.com