I slugged down a few too many Monster Energy drinks, and went into a hobby frenzy this weekend.  I was 3D-printing, post-processing, sculpting, model-building, converting, and scratchbuilding.

Total geek-out.  I loved it.

To see what I was up to, follow me on Instagram at https://www.instagram.com/johnbearross/
It's motorcycles, guns, miniatures, and 3D printing stuff, along with updates to the novel's progress.

It's probably my last hobby weekend before I start writing Junctionworld Book 3, so I put maximum effort into it.  It was a rush. 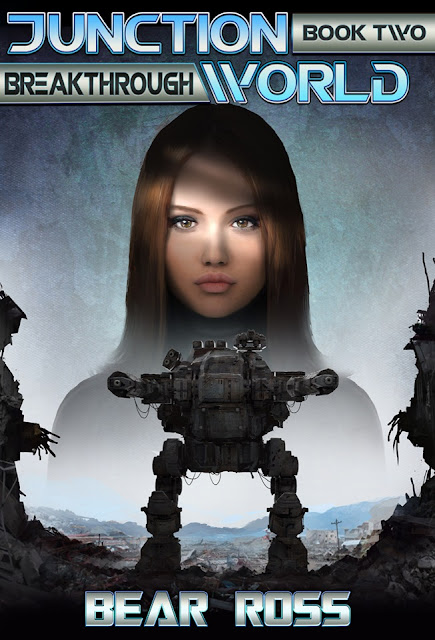 Anyway, just want to remind you that Book 2, Breakthrough, drops on the 11th of this month.  I am really looking forward to the release.

Anyway, here's the second to last snippet before the book drops on Amazon.

The scene is the Enforcement Directorate wants to question Prath and Vervor after Jessica pulls off a major feat.
An entry team storms Vervor's workshop, and then these two walk in...

A pair of Model Ninety-Nines entered the broken door, strolling in at a half-disinterested pace. They were armed, but wore functional, casual uniforms that differed from the combat-loaded Nines. Their demeanor was more relaxed, in contrast to the tense, machine-like shock troops.

Prath observed the older, more weather-beaten Ninety-Nine had the rank tabs of a Senior Investigator, followed by his designation, 44490-G.  Composing himself, he spoke in a submissive, soothing tone.

“I beg your pardon, Investigator,” Prath said, “but may we--”

“Tase subject,” 44490-G said, pointing to the nearest combat Nine without looking at Prath. With a sizzling burst of electricity, the tall Ascended dropped to his knees in agony.

The younger Ninety-Nine examined the digitpress fingertips of Kitos and Vervor with a handheld scanner. One of the combat Nines had to prop up the moaning Prath to scan his eye with a retinal examiner. The Myoshan pointed a defiant claw at the senior Ninety-Nine investigator.

“Now, see here,” Vervor started.  “Our fees and other payments are not yet due. You can’t just--”

“Tase subject,” 44490-G said again, nodding at Vervor. The Myoshan let out a grating scream as voltage poured through his small, scaly body, and he sat down with a thump next to Prath.

Vervor cursed and writhed as he rode the lightning once more. Flopping like a landed fish, he brushed against Prath, extending the circuit. Prath jerked as his nerves and major muscle groups fired involuntarily once more.

If you haven't already, hit that link to pre-order, so we can show Amazon we're coming strong out of the gate.  Thanks!