I don't know how you imagine the 20mm Mattis cartridge from my book, Defiance: Junctionworld Book 1, to look, but here's my digital sketch of it.

Short, pudgy, about the length of a AA battery.  Actually, if you have a C battery, it's about that size and diameter.

It's basically the Ascended equivalent to our own .45 ACP cartridge.  They love it, and don't like budging from tradition. 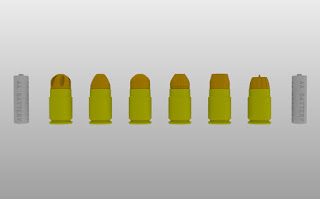 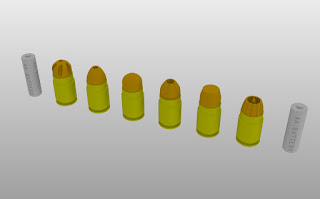 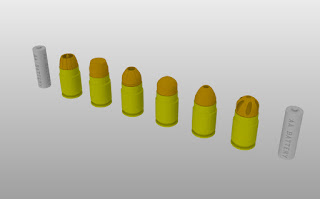 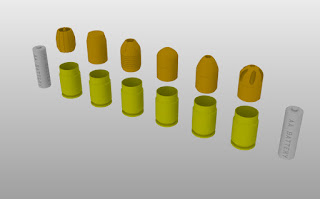 Actual brass works out to 20x35mm in regular nomenclature.  Cartridge Overall Length is 50mm for feeding from standard magazines.

There's not a lot of room in that case once the projectile is seated, so I handwave the fact that propellants will be more advanced in a sci-fi setting.

Here are the worldbuilding snippets that didn't make it into the book that describe the cartridge, from the perspective of an interworld weapons journal.

These, and other pieces of story, will be offered later.

“Named for one of their fiercest war chieftains, the 20mm Mattis cartridge has served the Ascended well for a number of centuries, despite the advancement of portable energy weapons. The recoil of the hard-hitting round is substantial, but even Humans, parallel-world cousins to the Ascended, can use the round given sufficient conditioning and training.”

“20mm Mattis can feed from box magazines, drums, tubes, and even more primitive revolvers with the use of radial spacer-clips.”

“The 20mm Mattis, also known as the .787 Self Defense, is a classic chambering for both handguns, carbines, and rifles. It has a decades-old, well-earned reputation as a sentient-stopper. Loadouts vary across the technological spectrum, from copper-jacketed tungsten projectiles to more advanced thermite rounds with EMP kickers for tougher targets.”

“The round first came to Junctionworld during the Ascended Migration, and caught on quickly with larger-framed beings. The Ascended, an advanced and innovative species, brought it to the interdimensional crossroads as they fled those mechanical terrors of their own making, The Purge. Even a Class 4 Purgehound can be stopped dead (if such a term can be applied to the abominations) in its tracks by a well-placed round of 20mm Mattis to the processor cortex assembly.”

Oh, and among the many firearms it can fit, it show up in the story in this...The Larue 787.  A fun little carbine.  More about it in the book, now for sale.